How Throwing a Dart Blindfolded at a Map Helped Us Raise $34,000 in 3 Hours – Travel By Dart

How Throwing a Dart Blindfolded at a Map Helped Us Raise $34,000 in 3 Hours

Thank you for visiting our website and reading our blog! Even though you are here, we’re not assuming you know what we are all about, so we’re making this blog post about the things that you might not be aware of. If you haven’t seen the video above, check it out!

We want to live a life in which we are free to achieve our dreams, do the “impossible” and help the world all at the same time. So, we created a TV show. The concept is that we throw a dart at the world’s map, travel wherever it lands and help the land or the people we visit. Whether it’s building water wells in Africa, libraries in West Indies, home shelters in Afghanistan, and so on we go where the dart takes us. And most importantly, we take others with us along the way. Since there is really no budget and we are just two regular dudes, we rely solely on our creativity and resourcefulness to make things happen. Is that possible? It sure is, because… we made it happened. Twice.

Travel by Dart started as a fun project, where we threw the dart the very first time and hit the vicinity of North Pole. Since our rule was to travel to the closest land mass within 360 degrees of the dart hit (in case it hit the ocean), we ended up in Svalbard, the closest livable land mass. It is an “archipelago” with 2,000 people and 3,000 polar bears. We originally had 8 weeks to plan to make the trip happen from dart throw to the small plane touching down. The first 2 weeks we went down a huge rabbit trail with another concept, then held a focus group and found out we were in left field. We re-thought our process to make it happen and left us with 6 weeks until the trip starting our plans all over again. Getting close to the North Pole in December is not the easiest thing to do, since there is pitch black 24/7 and the temperature is three times colder than your mother in law. 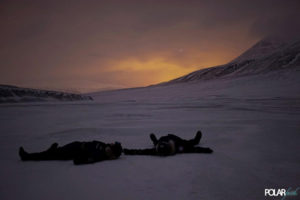 We had no money, but lots of ambition. We recorded ourselves on video for an exercise – see the documented amateurish video HERE. And this is what we did: after researching the Polar life, we discovered that the Polar bears species will disappear in the next 75 years, according to scientists. We created a website called polarfaith.com, launched an online campaign, and started taking donations just to make our trip possible. People wanted to help us. We also committing to give away $5 to World Wildlife Fund from any donation we would get, big or small. It didn’t matter if we had to shovel 500 driveways of snow and babysit our friends kids every night, we were making this happen.

Canada Goose came on board with providing all of our expensive arctic gear as soon as they saw our story featured in the media. Silver Jeans came on to provide us some fresh new clothes to look good on camera too. A few cash donations came in through the website, but not really much – about $2,000. That’s when we decided to take with us a professional videographer and shoot commercials in the Arctic for eventual sponsors who want to showcase their business in a non-traditional setting. Bingo! We got 5 big hearted people (see them on our Sponsors page) sponsor us with $1,000 each, and off we went to Svalbard! We floated the rest of the trip with a visa card and donated some cash as promised to WWF.

On the last plane to Svalbard Matt ended up sitting next to the old GM of Svalbard Tourism, who loved our story and within 24 hours of arrival we were meeting with the government agency to completely fund all of our adventure and provide us with full gear and guides to go out and film 6 hours a day. They paid for two dogsledding treks, snowmobiling, glacier climbing and took us to places we never would have imagined. Did you know one of Chef Ramsey’s apprentices has the largest wine cellar in Scandinavia nestled deep in the permafrost with the best ice wines in the world? Or that Svalbard is host to the $40 million dollar global seed vault, where cryogenic un-genetically modified seeds are stored just in case the world comes to an end? How about finding out that the “best tasting raw seal” in the world is being served to you after you eat it. Everything was fully organized for us and we had a blast… all because we took a leap of faith and just went for it. All of this awesomeness was not only awesome for the sake of keeping our expenses ridiculously low, but was instrumental in helping transforming the footage we had into a pilot called Polar Faith.

We came back home with amazing video clips and soon enough we ended up with Travel by Dart: Polar Faith. It was accepted into the Global Visions Film Festival, the longest running documentary festival in Canada. Our first film placed 4th and the media loved us. We were on every local channel that exists. International media outlets also started to smell a good story.

All these lead to a deeper motivation. A question that we found within ourselves arose: if we could get everybody involved, could we make a difference in the world regardless of whatever cause we serve? There are so many things in the world that need fixing, could we travel the world trying to help and prove that world change really is possible? This questioning brought us into getting ready for our next dart throw – Episode 2 – but with WAY more passion and desire to do it. The system looked like it would work. The Polar experience was cool, sure, but we had to take it to the next level. As soon as we announced that we will throw another dart at the world’s map we were overwhelmed with support. Family, friends, media, sponsors – all raising to a whopping total of 145 people and 37 companies (HERE) who contributed in different ways and helped us get the fabrication of a reality series of the ground.

This time, it was not just a dart throw in a basement anymore but a three hour fundraising event which we had to get seriously creative about. We wanted to go big. We did not offer just the usual silent and live auctions, but we gave people the chance to bid on where the dart would land. We came up with an adventurous bid option for one fan who would pay to come with us even before we threw the dart… while promising to come before knowing where we are going. And somebody did just that (more on that later). Also, for the ‘right’ bid, we would go to the winner’s house and cook a traditional dinner from the country we are about to go! Last but not least, we offered a good Samaritan the chance to throw the dart for us, for the right donation! See video HERE.

In those three hours, we raised $34,000, and the dart hit Russia. We will now go there between October 8-20 with not just a crew, but with Cindy Mitchell, a 56-year old cancer survivor who took the leap of faith to come on the trip. We will work in numerous orphanages around the Black Sea cities Sochi and south toward Ukraine and Kazakhstan, bringing a bundle of love and efforts strictly towards the cause for helping child homelessness. We have now connected with the United Nations and UNICEF and have their full support as well, sending troops to greet us and translate, while helping make our second journey a success. The more money we’ll raise, the more we’ll still have to offer those kids. Right now is crunch time. Everything rests on these next few weeks before departure. Pressure is on.

The good news is that if you want to support the project, you will get something back. Visit our Get Involved page see what’s in it for you. There’s lots of goodies to incentivize people for giving to the cause. On the other hand, spreading the word about Travel by Dart by sharing our trailer or liking our Facebook page HERE would be a huge help. We hope to inspire and soften the hearts of everyone who follows our journey, unlocking the spirit of adventure and the most important thing of all… faith.

Thank you for reading and becoming part of our team!